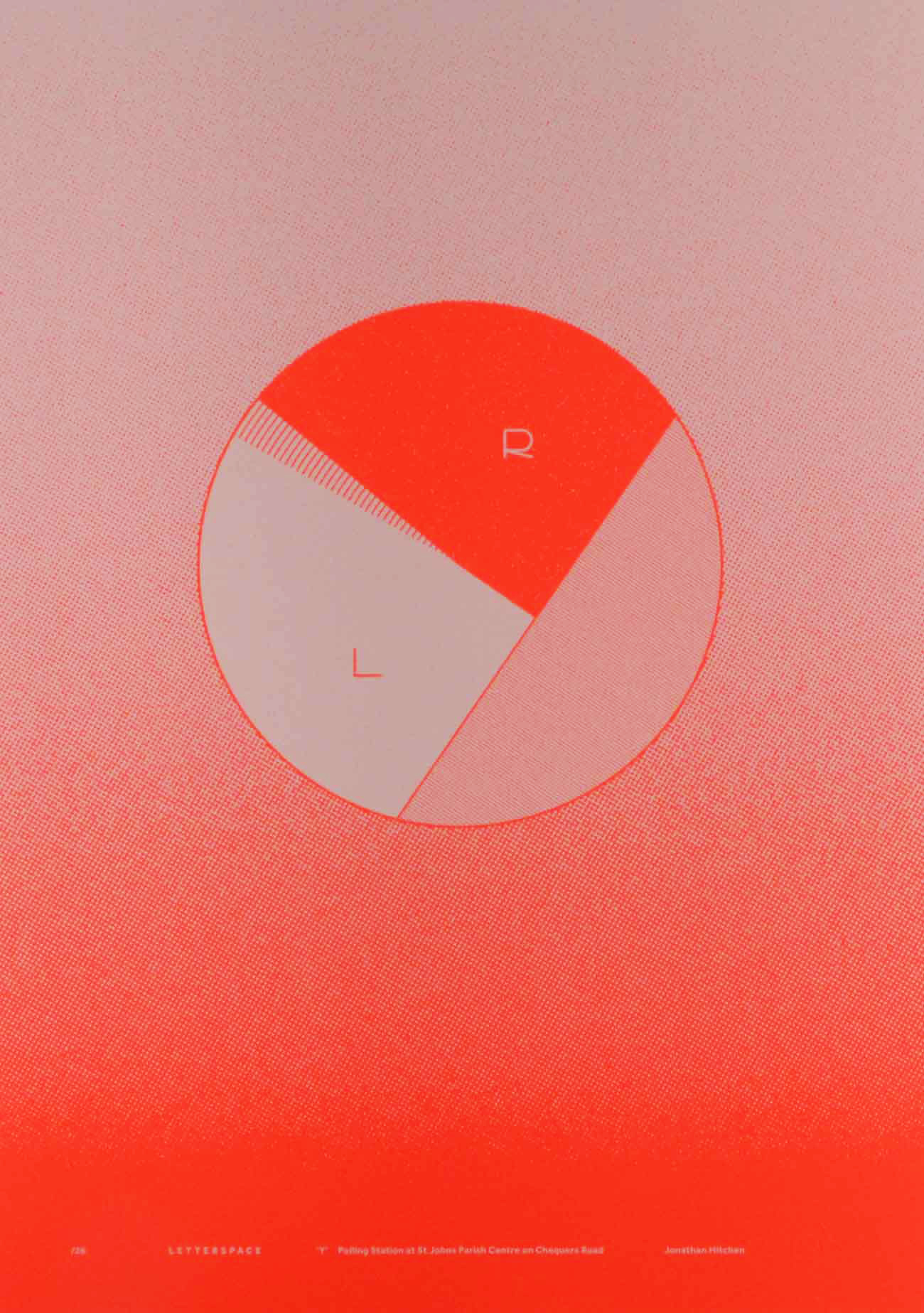 "This letterform is based on my polling station at St John's Parish Centre on Chequers Road in Chorlton-cum-Hardy. I've used this polling station a few times - in six general elections, a handful of local elections and two referendums - but the process of democracy gives this space a greater sense of significance in my imagination than just my actual experience of being in a particular room. I only ever see this room decked out for an election. Trestle tables. Flimsy booths. Stubby pencils. Lists of names. Simple material facts that frame more complicated memories ranging from hope (short-lived, as it turned out, in the wake of May 1st 1997), to bewilderment (June 8th 2017). I take the act of voting seriously, but find it increasingly difficult to believe that my vote will actually make any difference. I routinely wonder whether or not to spoil my ballot paper but I try to remain optimistic. The diagram shows the results of the EU referendum on 23 June 2016. Alongside Brexiteers (L) and Remoaners (R), I've included the potential voters who chose not to exercise their democratic right, and indicated the 3.8% majority on which the decision to leave was based. I requested - and was given - the letter Y [for this project] because I envisage this work as an emphatic YES (voting as a positive act for change) rather than a mealy-mouthed NO (voting as a knee-jerk opposition). This work is ultimately about stalemate. The hubris of the majority and the intransigence of the minority, or should that be the other way round. It's about the polarised opinions that dominate contemporary political discourse and the complicity of a media that chooses to present the world in black and white without any shades of grey. For the record I was one of 16,141,241 people (48.1%) who voted to remain within the EU. 17,410,742 people (51.9%) voted to leave. The majority in favour of leaving was 1,269,501 (3.8%). 12,922,659 people chose not to vote (27.8% of a total electorate of 46,500,001). 25,359 ballots were rejected." #tickoneboxonly #divideandrule #echochamberbubblewrap

About the designer, Jonathan Hitchen

Jonathan Hitchen is a graphic designer and Senior Lecturer in Graphic Design at Manchester School of Art. When he's not teaching, or trying to persuade computers to make drawings, he works with The Modernist Society on their quarterly magazine. He's currently working on projects with The Portico Library about Peter Mark Roget and the Library of Babel.