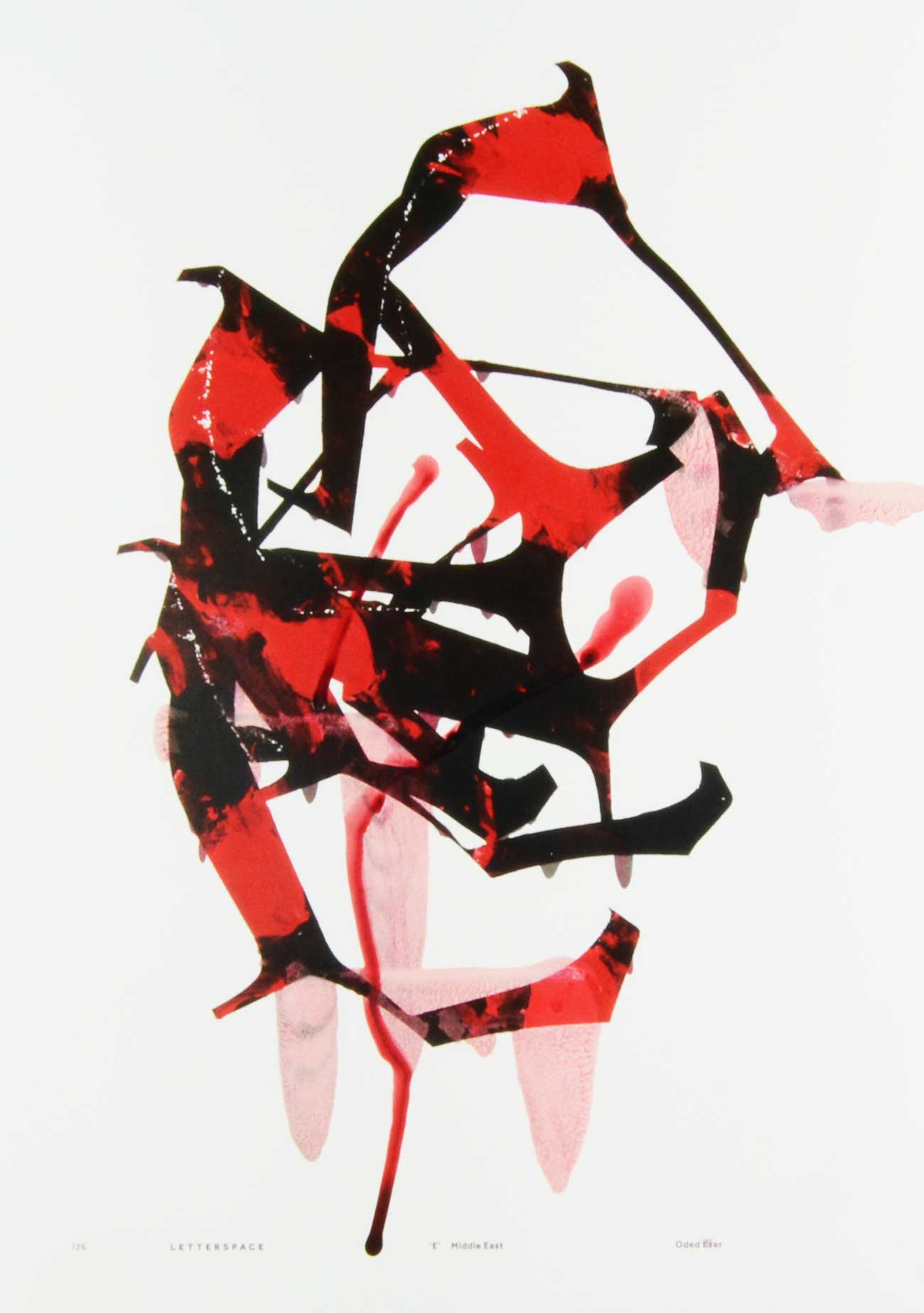 I chose the letter E intuitively, as it is the first letter of my surname - Ezer (meaning 'helping' in Hebrew). A surname is a sociopolitical means of cataloguing the individual within and towards the social and cultural space. The fact that the E is also the beginning of the word East, which in itself is a means of geopolitical cataloguing, also fascinated me. In this way what began as a personal utterance quickly became a reflection of a 'place', a loosely-defined, amorphous, almost borderless geographical region. A place that arouses in me contradictory, paradoxical feelings of strangeness and intimacy. My middle E in the Middle East: My Middle E-ast. The E is not (just) a letter; it is an entity, a mood, it is a sponge that has absorbed the spirit of the times. It is the soul of the Middle East, 'photographed' at a particular moment. It is my Middle East, that of my ancestors, of my family. But now it is battered, burnt, beaten, disintegrated, suspecting, hating, murderous. Hell is only a few hours' drive away. Russia and America, Iran and Turkey, what remains of 'Iraq' and what remains of 'Syria', Kurds, the Islamic State and Hezbollah, Shiites, Sunnites, Alawites, Kurds, Christians and Druze all act in the tragedy that once was called 'the Arab Spring' - how ironic.

About the designer, Oded Ezer

Oded Ezer is a graphic artist and typographer. Before starting his career as a designer, he was a musician and a poet. Ezer lived in Jerusalem, London and in the Negev Desert before he settled in greater Tel Aviv. Ezer is best known for his typographic design fiction projects (such as Biotypography, Typosperma, Typoplastic Surgeries and, more recently, for his series of eight typographic videos for the V&A), his design for the New American Haggadah and SkypeType poster, and for his ongoing contribution to Hebrew type design. Ezer studied graphic design at the Bezalel Academy of Art & Design, Jerusalem. In 2000 he went on to establish his own independent studio, Oded Ezer Typography, where he specializes in typographic and fonts design. In 2004 Oded founded HebrewTypography type foundry, selling his own typefaces to leading media companies and design studios. Ezer's projects, posters and graphic works are showcased and published worldwide, and are part of permanent collections of eminent museums such as the New York Museum of Modern Art (MoMA, NYC), Israel Museum of Art (Jerusalem), Victoria and Albert Museum (V&A, London), Museum für Gestaltung (Zürich) and Design Museum Holon (Tel-Aviv). Oded Ezer is a senior lecturer at the Holon Institute of Technology (HIT); Teaches at the Nuova Accademia di Belle Arti Milano (NABA); Was an artist-in-residence at the Rhode Island School of Design (RISD); And frequently leads typography workshops in the US, Europe and Asia.Ezer was elected to the Alliance Graphique Internationale in 2009. His first monograph Oded Ezer: The Typographer's Guide to the Galaxy was published by Die Gestalten Verlag in May 2009.